The results of the ECMO to rescue lung injury in severe ARDS (EOLIA) trial have long been awaited, since the first two trials in this field were already conducted decades ago and the results were controversial. The investigators around Prof. Alain Combes showed now in the largest international randomized multicentre setup so far, that the mortality decreases in patients with early initiation of ECMO (Extracorporeal Membrane Oxygenation) in addition to mechanical ventilation in severe ARDS patients.

EOLIA, as an investigator initiated trial was largely sponsored and conducted by Assistance Publique–Hôpitaux de Paris. The trial was designed to determine the impact on survival of early and systematic installation of veno-venous (VV) ECMO in severe ARDS patients.

Therefore, 249 patients were randomized in a protective ventilation arm with latest standard of care or the same treatment with addition of VV ECMO. However, 28 % of patients of the control group crossed over to the ECMO group as rescue therapy.

Although the results of the two groups showed no statistical significant difference, the mortality in the ECMO group was 11 % less. “The 28 % rate of crossover among patients with refractory hypoxemia in the control group may have diluted the potential effect of ECMO”, the authors said.

Despite the trial has its limitations, the EuroELSO (Extracorporeal Life Support Organization) stated on their latest conference: “The results of the EOLIA trial were presented with a clear advantage for early ECMO compared to conventional care with late rescue ECMO in ARDS”.

The secondary endpoints also indicated a potential benefit of the ECMO treatment. Compared with the control group, ECMO patients had more days without renal replacement therapy and more days free from renal and cardiac failure. The occurrence of strokes was low in both treatment arms – whereas ischemic stroke events were even lower in the ECMO group. Furthermore, Harrington and Drazen, authors of an editorial criticized, that the focus was on the primary endpoint when the Data Safety Monitoring Board terminated the trial earlier for futility, but the possible secondary outcomes were neglected.

With a good patient selection and well trained medical staff, also non ECMO centres were able to provide a safe and effective extracorporeal treatment. A subgroup analysis of the trial showed no advantages of the patient cohort that was treated in ECMO centres compared to those starting the therapy in non-ECMO centres.

All in all, the EOLIA trial provides another element in better understanding the management of severe ARDS in adults. Despite the primary endpoint analysis did not reach significant difference, the trial data suggest indeed that early ECMO initiation has clinical benefits.

A methodological problem in this study is the crossover group, which makes the interpretation of the primary end point difficult. Additionally, the Data Safety Monitoring Board stopped the trial after enrollment of 249 patients (331 originally planned) for futility, because with crossover it was unlikely to reach the expected 20 % relative difference in mortality.

For further information: The EOLIA trial and two referring editorials were published in New England Journal of Medicine. 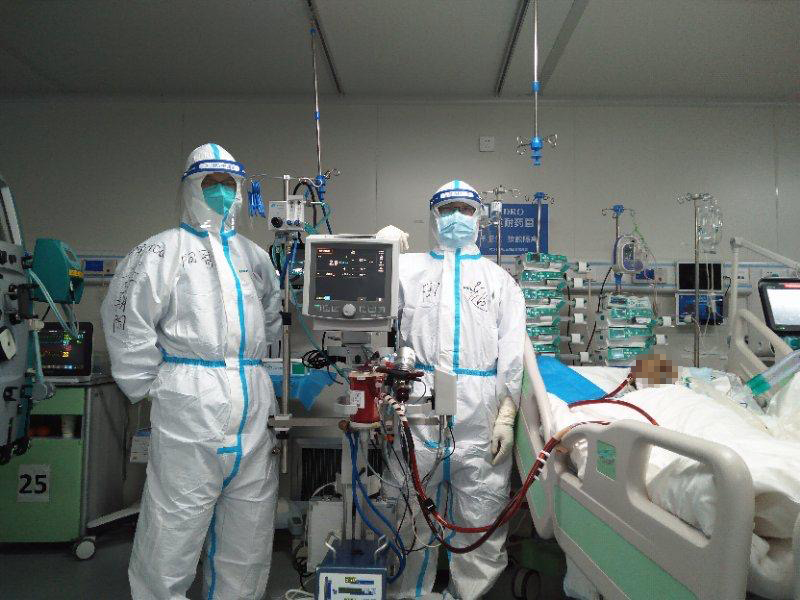 ECMO becomes crucial therapy in battle against COVID-19 in Europe

Xenios consoles as lifesavers As the coronavirus spreads and infections with COVID-19 further increase throughout Europe, ECMO therapy turns out to be a necessary option for patients with severe courses. Xenios AG, a subsidiary of Fresenius Medical Care, provides ECMO consoles that can be used for the treatment of patients who ...

Video: How do artificial lungs work?

Xenios had the chance to work together with VRM GmbH & Co. KG, based in Mainz, Germany, to shoot a video about the function of an artificial lung and to explain the importance and the current training situation in China and the USA. VRM is one of the most important ...

Fresenius Medical Care is again supplying medical equipment that is urgently needed to combat the COVID-19 outbreak in Wuhan, including 16 Novalung® consoles, the second such shipment to the Chinese city. Novalung is an extracorporeal membrane oxygenation (ECMO) system from Fresenius Medical Care that pumps and oxygenates a patient’s blood. ...

Our contribution in the battle against COVID-19

Physicians and medical staff around the world are fighting the COVID-19 pandemic. We’re doing our utmost to ensure access to our life-saving technologies – for the best possible outcome for patients.
Find out more in our news section.